City Forests has voluntarily designated 2,376 ha of its land as permanent reserve sites in and around its plantation forest areas.  This represents 10% of the working forest area that City Forests manages.

These reserves have a wide variety of conservation values, including small areas protected for unique and nationally significant soil types, regenerating and mature native forest areas, wetlands and significant water catchments protected for rare native fish species. These areas range in size from a few hectares to several hundred hectares. Some areas have important conservation values, while others are of relatively low value.

There are large stands of manuka forest (Leptospermum scoparium) in the City Forests estate and its value includes nurturing large bee populations and supporting local manuka honey production. Manuka honey is used worldwide because of its health-giving properties and powerful antibacterial qualities.

The company has a management plan for these reserves and it employs ecologists to survey the sites (and potential sites) to assess their value and assist us to develop appropriate management and monitoring protocols. City Forests has had a reserves' classification system developed for the reserve areas by Wildland Consultants, an ecological consultancy organisation.  The system is designed to comply with the principles and criteria of FSC® .  Classification has been progressively applied to all reserve areas as fine level survey analysis becomes available for them.  This will help us to prioritise our management effort and expenditure towards the most important conservation values and issues present.

Wildlands Consultants has carried out a number of fine-level ecological assessments covering major forest areas and significant reserve sites. City Forests' recent land and forest additions at Hillend and Takitoa have been assessed, as well as the Silver Peaks forest. The resulting reserve areas are incorporated into our monitoring programme and classified accordingly.

City Forests regularly checks designated reserve areas for any management issues that need addressing.  During 2020/21 six native reserves were assessed with no major issues to report. Recent weed control operations in QEII and Fish & Game Wetlands of high ecological significance were a result of regular monitoring under City Forests management, this operation was done with stakeholder consent and will continue to be monitored closely in future years. In 2019 a new area of young Pinus contorta was discovered in our Waipori forests amongst a tussock reserve area, these wilding trees will be dealt with in the coming years as part of our wilding tree removal programme. Ongoing reserve monitoring will continue across all City Forest reserves.

During 2014 an ecological survey of the major reserve areas in the company's Kaitangata block was completed. In early 2018 harvesting in the area was completed, a re-assessment of the native reserves concluded they had been left in excellent condition with minimal damage from the harvesting operations.

In late 2017 an update of the Waipori fine level ecological assessment was completed by Wildlands Ltd., and a comprehensive report was produced. This has been built into our forest description and management plans.

Since 2016 City Forests has co-funded an ongoing project gathering data on New Zealand Falcon (Karearea) population dynamics in our forests. The major finding of the work so far has been that plantation forestry land; both cutover and standing forests, provide excellent habitat for NZ falcons to nest, fledge and thrive. The Forest Growers Levy Trust (FGLT) has also granted another year of funding through to 2023, to continue the project, continuing to examine conflict management options for forest operation and Falcon interactions, and to develop proactive steps for forest growers to assist in falcon conservation.

During 2015 and 2016 the company also contributed to a Bush Robin/kakaruai monitoring project being run by the University of Otago's Zoology Department in the company's Silverpeaks forest.

City Forests continues to explore options of habitat enhancement for Eldon’s galaxias, Galaxias eldoni (native fish) in our forests. The main area of focus has been Shepherds Stream in our Waipori forest where Galaxias eldoni have been identified but are threatened by the presence of Brown Trout. We are currently working with a locally-based native fish species expert with a view to establishing a long-term enhancement area in this stream network where we hope eventually to translocate Galaxias to and expand the current range of the species.  In 2018 trial methods for the removal of trout from the upper tributaries of Shepherd Stream and the Trust Power water race were assessed, and in 2021 debris from the streams was removed to enable easy electrofishing. Annual monitoring of the Shepherds stream catchment ensures barriers to a fish passage such as waterfalls and raised culverts remain intact.

The company contributes to the work of the Yellow-Eyed Penguin Trust, the Orokonui Ecosanctuary, and is a significant funder of the Dunedin-based Predator Free Halo project.

The company is also investing heavily in wilding tree removal operations in the Waipori wetlands reserves, including in an adjacent Tussock reserve under DOC management (now largely completed, but monitoring continues). During 2022 another large area was cleared of Pinus contorta within City Forests' boundaries, with more work planned for the latter part of 2023.  In and around other forests regular monitoring and wilding removals are taking place. The company actively follows the guidance of the official Wilding Risk Calculator when planning planting operations both on new and existing company land. 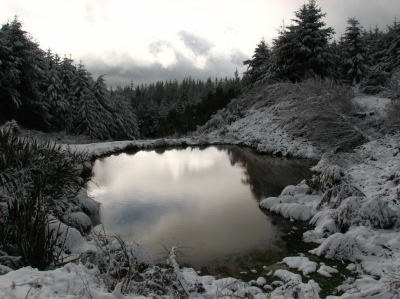